The White House Open Government Initiative and the General Services Administration, working closely with the Office of Management and Budget's Office of Performance and Personnel Management, have launched a public consultation (through January 7, 2011) to obtain input on a design concept for a government-wide software tool and process to elicit expert public participation. In addition to making government more open and accountable to the public, this also advances the Administration's objective of strengthening problem-solving networks to improve outcomes and reduce costs, one of three key performance management strategies laid out in the President's FY2011 budget.

The proposed concept is intended to be complementary to two of the ways the Federal government currently obtains expertise to inform decision-making, namely by convening Federal Advisory Committees and announcing public comment opportunities in the Federal Register.

The Administration wants to hear from you about:

If you prefer not to access the wiki, you can post your comments on the discussion forum or email them to OSTP at expertnet@ostp.gov.

On December 8, 2009, the White House issued an unprecedented Open Government Directive requiring federal agencies to take steps to achieve key milestones in transparency, participation, and collaboration. On the one-year anniversary of the Directive, the White House is answering your questions on the Administration's progress and the ideas and practices that are being implemented at the White House and across the agencies in a live video chat on WhiteHouse.gov.

You're Invited to the Future Systems Technology Advisory Panel Meeting

Commissioner of Social Security Michael J. Astrue established the Future Systems Technology Advisory Panel under the Federal Advisory Committee Act on February 8, 2008. The mission of the Panel is to provide independent advice and recommendations on the future of systems technology and electronic services at the Social Security Administration (SSA) five to ten years into the future. The recommendations of the Panel will provide SSA a roadmap of future systems technologies needed in carrying out its statutory mission. Advice and recommendations will relate to areas of future internet applications, customer service, privacy and other arenas vital to the SSA's ability to serve the American people.

The Future Systems Technology Advisory Panel will have its next meeting on December 13, 2010. This meeting is open to the public.

Comments Wanted! Self-Evaluation of Efforts to Provide Meaningful Access to the Disabled

Social Security is conducting a self-evaluation of policies and practices supporting section 504 of the Rehabilitation Act of 1973, which requires federal agencies to provide meaningful access to their programs and activities to qualified persons with disabilities. 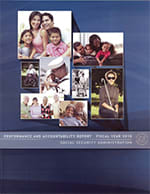 On November 15, 2010, Social Security published its annual Performance and Accountability Report PAR), which combines the agency's annual performance report with its audited financial statements to provide full disclosure of financial and programmatic operations. The PAR describes Social Security's programs and organization, and how the agency benefits the public and achieves its mission. 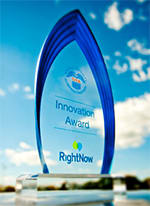 Last month, RightNow Technologies presented SSA with the 2010 RightNow Customer Innovation Award, during their October's Customer Conference, for being the first federal government customer to go live with a mobile interface to Online Answers.

The Social Security Administration has unveiled a new website titled Impact of State Disability Determination Services (DDS) Furloughs. The website incorporates an interactive map and timeline to visually portray the damaging effect that furloughing state DDS employees has on the processing of disability claims and the payment of initial monthly disability payments to states' disabled citizens. 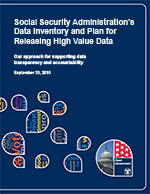 The Social Security Administration has published its Data Inventory and Plan for Releasing High-Value Data on the September 30, 2010. The inventory identifies high-value data holdings and plans for releasing data that will improve public knowledge of our programs and operations.

Congratulations to Erica Solway, Lindsay Trapnell, Laura Hunt, Alex Butterwick, and Kate Schriver, whose video, "Social Security: Real Stories," has won our "How Social Security Has Made a Difference in My Life" video contest!

The deadline to submit videos has now passed. The purpose of the contest was to document stories of how Social Security makes a difference in the lives of Americans. As Social Security turned 75 this year we encouraged you to help share your story with us and the world.

Thank you to all who participated and enjoy the winning video!

On July 14 2010, the Chief Information Officer hosted an Open Government Employee Awareness Day Event at Social Security's Headquarters in Baltimore, MD. The purpose? To Increase employees' understanding of the principles of open government and how they can become involved in activities to help SSA become more transparent, participatory, and collaborative.

Last week, O'Reilly Radar's Gov 2.0 reporter, Alex Howard, visited the Social Security Administration headquarters outside of Baltimore to speak about social media and government at our Open Government Employee Awareness Day. Before his presentation, he sat down with Frank Baitman, the agency's chief information officer, to talk about Gov 2.0, open government and technology.

Click here to view the full interview with video. 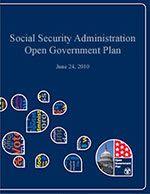 Today we posted our updated Open Government Plan. Your feedback and comments were very helpful throughout the plan development process.

We have also published:

We want to thank everyone who offered comments about our Open Government Plan. Your feedback has been very helpful to us. Soon, we will publish our final plan on this web page.

This dialogue has ended, but we will launch dialogues on other topics in the near future. Come back and share your ideas!

Other SSA News and Updates

The Social Security Administration is committed to creating an open and transparent government through the following initiatives: